Ivan Ostrochovský was born in Žilina, Slovakia, in 1972. His training as a filmmaker included studying documentary film at the Academy of Performing Arts in Bratislava and postgraduate studies at the Academy of Arts in Banská Bystrica. Ostrochovský’s career as a director, producer, screenwriter, and cinematographer for film and television now spans more than ten years. He is co-owner of and producer at sentimentalfilm and Punkchart films. For his documentary debut VELVET TERRORISTS (2013), he received, among others, the FEDEORA Award (Karlovy Vary), as well as his first international recognition. He wrote the script together with his two co-directors, Péter Kerekes and Pavol Pekarčík, while the camerawork was done by Martin Kollar, whose film 5 OCTOBER was produced in 2016 by Ostrochovský. As a director who gains the fictional from documentary film and the documentary from feature film, he experiments with genres and expectations. This also goes for his multi-award winning feature debut KOZA (2015), that breaks with common narrative conventions. With his highly acclaimed feature film SERVANTS that premiered at the Berlinale in 2020 in the competition section “Encounters”, he now seems to have arrived in the fictional genre, documenting a little regarded aspect in the history of Czechoslovak communism: the conflict of the Catholic Church with the regime and the association “Pacem in Terris” which entered into a pact with the regime in return for its independence, freedom of faith and ties with the worldwide Roman-Catholic church.

The film VELVET TERRORISTS (2013), realized by Ivan Ostrochovský in collaboration with Pavol Pekarčík and Péter Kerekes, takes its title from the three people it focuses on. They are men who during the Czechoslovak communist era, motivated by political ambition and/or frustration with the prevailing conditions and/or a certain predisposition to violence, took solo or collective action against the regime with terrorist attacks (predominantly by using self-fabricated bombs). The velvet terrorists are precursors of the Velvet Revolution (November to December 1989) that itself went on without acts of terrorism or violent assaults and was primarily marked by peaceful mass demonstrations. What probably also makes these “terrorists” velvety is that in all their efforts towards the hardened-heroic, they appear soft and failed.

What bothers you about the present system?” one of them, Vladimír, asks nine young women at a casting. The 60-year-old is looking for a candidate physically and mentally capable of carrying out the revolutionary acts that brought him four prison sentences. “Hypocrisy”, “dishonesty”, “indifference”, “fear,” some of the women reply. “The neo-Nazis who attack me ‘cause I look different,” says Iva, whose name we do not learn in the movie. “And if the worst comes to the worst, would you go so far as to use a weapon?” Vladimír continues to ask. The women hesitate, one laughing awkwardly, one saying almost regretfully: “I’m not sure about that.” It is only Iva who, after a moment of hesitation, answers in all seriousness: “I think so.” The casting situation is an exemplary case of the cinematic approach of Ivan Ostrochovský, who often operates with semi-fictional scenarios in his documentary works in order to make visible biographically authentic fragments of lived life, and, by using the dramaturgic device of a plot, to simultaneously expose it as an authenticity effect. The casting for the “terror training” is also the casting for a role in this film that drew international attention at the Berlinale 2014. When Iva replies “Yes” to Vladimír’s question if she would use a weapon, she also says “Yes” to the role that she will play in the hybrid documentary-fictional concept. This can be seen even more clearly when Vladimír asks her at the end of her “training” whether her motivation “for what we’re doing here is strong enough” for her to keep on going. After a long time of hesitating and picking at her canned lentils – the lentils being part of the training with Vladimír and also a culinary exemplification of the terrorist’s asceticism – her eventual “Yes” is unconvincing and without eye contact. What can be felt clearly here is the ambiguity of the conversation that carries with it both the issue of political disobedience as a life program and the job of being the protagonist of a documentary film. But this is just what allows Iva and Vladimír to approach each other in a playful manner, which, despite different experiences of discrimination, leads to a respectful and thoughtful exchange that affirms their actual individual experiences in all their complexity and complicatedness.

With KOZA (2015), a documentary realized two years later, Ostrochovský gravitates even more toward the fictional, telling a story about the former Slovak boxer Peter Baláž, nicknamed “Koza” (Engl.: “goat”), who, as the tragically ironic antihero of a roadmovie, plays himself. The plot goes like this: Koza earns his living as a scrap metal collector. When his girlfriend gets pregnant and does not want to keep the baby, he makes a decision. Together with his aggressive-depressive boss as his agent, he embarks on a boxing tour that takes him through provincial Slovak and Austrian villages to Wuppertal. From the 4000 euros that he set out to earn, there eventually remain only 500, plus a couple of head and nose injuries, a concussion, and a doctor’s advice to call it a day with boxing. The dream of success that in real life began and simultaneously ended with a first-round defeat at the Olympics (1996) cannot be attained (even in fiction). “Raw” is an adjective that repeatedly turns up in descriptions of this film that, in addition to Czech Television sponsoring prizes, also won the Works in Progress Award at the Karlovy Vary Film Festival and was nominated to represent Slovakia at the Oscars. The film, though, is the exact opposite of “unworked”. Ostrochovský got the idea for the movie when Baláž, searching for a paid job to have money for his girlfriend’s abortion, came to him. When the plan to capture the life of Baláž through authentic scenes of his everyday life broke down, Ostrochovský and his producer Marek Urban decided to shoot a feature film. The images of the fictional story come from the footage of the harsh reality of the Roma neighborhoods, and achieve an immediacy (from the decrepit house front to the battered skin) that is almost painful. But just like the semi-documentary film VELVET TERRORISTS, the semi-fictional film KOZA, too, provides its protagonists with the possibility to have a self-determined narrative. A narrative that simultaneously alienates and brings the viewers closer to (the assumed) reality. With only the protagonists themselves knowing the scale of the cinematic design that puts reality and fiction in relation to each other.

What can be recognized as a similar invitation to self-empowerment is Martin Kollar’s film 5 OCTOBER (2016) that was produced by Ivan Ostrochovský. In the roughly 50-minute work, Martin Kollar accompanies his brother Ján on a trip that, going through West European areas, leads him back to Slovakia. The trip is planned and carried out against the backdrop of the ominous horizon of said October 5 when Ján has to undergo a life threatening operation in which a tumor is to be removed from the left half of his face, the growth of which equally endangers his life. The cathartic encounter with himself, with nature, which he comments on in his calendar in laconic wordings and drawings, inflates the space left for Jan to live that is reduced to the date, and infuses it with images of a world that with his film, his brother turns into a present to him.

The first work clearly labeled as a feature film, SERVANTS (2020), seems to break away from the above described. Rigorously composed black and white images are used here to tell a historical subject, the Catholic Church in conflict with Czechoslovak communism, in the style of film noir. The servants confronted in it are bound to two different powers: faith and ideology. The two young seminarians who join the theological faculty in Bratislava full with confidence face a secret service agent who is just as hard-boiled as he is lonesome. The images of the agent showing him in his underwear and bathrobe, at the ironing board in his flat in an industrialized apartment block, as well as the frontal close-ups of the rash spreading across his body have an almost documentary quality, contradicting the heavy aestheticization of the mise-en-scène. Just like in the case of KOZA, the formal and compositional rigorousness does not create distance for the viewers, but pushes downright elementary things to the center of attention: the bleeding nose, the pores of the face, the mold on the wall, the maltreated skin.

From boxer to priest to secret agent to terrorist – and from composer to punk (if you include the remarkable films on the Slovak composers Ilja Zeljenka, 2010, and Pavol Šimaj, 2014, and the production of PUNK NEVER ENDS, 2019, director: Juro Šlauka): Ivan Ostrochovský’s films map masculinity in its change from history to the present, as well as the conceptions and imaginations that are commonly associated with masculinity. At first glance, some of them may seem like familiar exponents of a toxic masculinity, but Ostrochovský’s genre-transcending experiments, which his protagonists play a significant role in, are equally strong in pointing out a potential overcoming of attributions that are on their way to becoming history.

photo: Punkchart Films/Pavol Pekarčík
"Being a producer is the only possibility for me to make films the way I want to make them. In truth, it is a necessity. I do not believe that it would be possible to find a producer who still has their wits about them who would approve of the way I make films. That means that I shoot the entire film in a “raw version” first, and then I shoot the entire film a second time."
Ivan Ostrochovský, www.aic.sk, February 2020 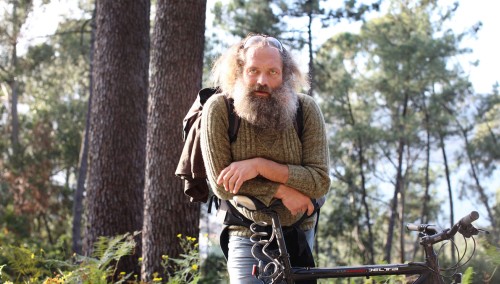 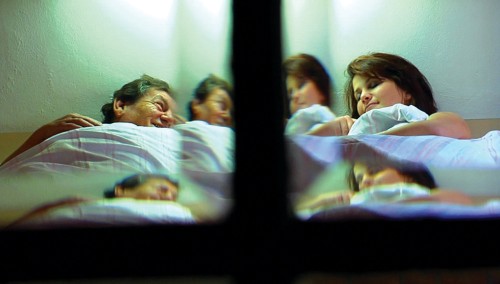 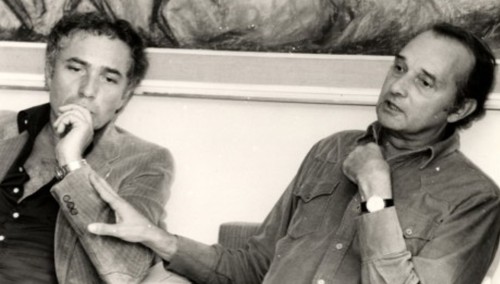 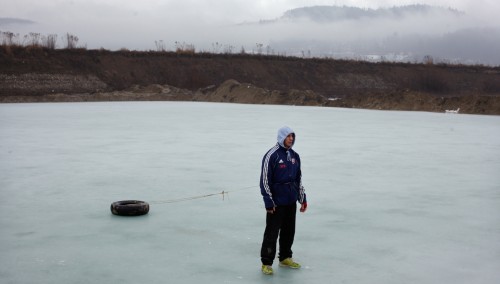 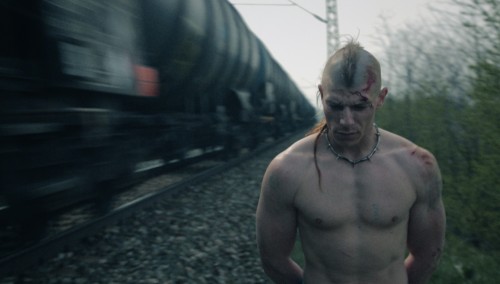 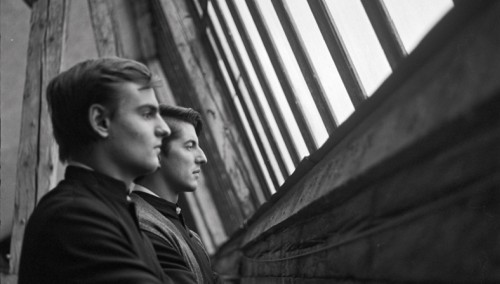 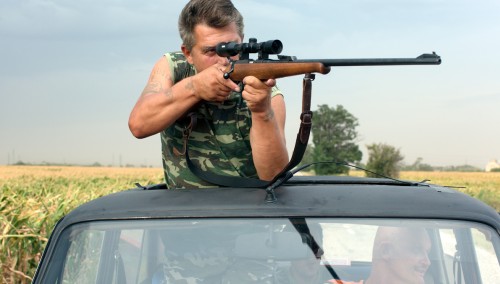