CROSSING EUROPE 2021 will be postponed until June

In light of the current pandemic, CROSSING EUROPE will not take place as planed between 21 and 26 April 2021. Instead the eighteenth festival edition will be postponed to 1 to 6 June. For this time we are planning an in-person event in its usual size, and additional online offers. The festival director Christine Dollhofer bases this step on the wish of being able to offer the possibility of physical interaction, something that cannot be guaranteed in the most optimal form in late April already, due to the expected developments of the Covid-19 pandemic. In addition to this, the postponement of the festival aims to act as a sign for a fresh start of film festivals in Austria, while putting the health and well-being of the audience and the team in the focus.

The CROSSING EUROPE festival team has been keeping a close eye on the situation concerning the Covid-19 virus and trying to gauge the feasibility of carrying out the film festival in late April 2021. Even if the situation winds down in the beginning of spring, due to considerations concerning health and well-being, as well as a lack of security in terms of planning, it would not be responsible to carry out CROSSING EUROPE during in the originally planned time-frame. After a comprehensive look at the current situation, as well as epidemiological predictions for the upcoming spring, the postponement of the festival was deemed necessary. Following talks with the funders and event partners, as well as coordination with other Austrian film festivals (particularly the Diagonale – Festival of Austrian Film, and the Vienna Shorts Film Festival) and cultural organizers in Linz and Upper Austria, the new festival date 1 to 6 June 2021 was agreed upon.

Based on today’s standpoint, it will most likely be possible to carry out a festival that our audience will be able to experience with its usual high standard and in a similar scope in June, while still keeping in line with the necessary hygiene, security, and admission regulations. CROSSING EUROPE and the audiences in Linz are very tightly connected to each other, film discussions and the active interaction with filmmakers have represented a major part in the festival experience since day one of the festival, and in April this aspect cannot be guaranteed due to the restrictive nature of the rules and regulations concerning events as well as travel restrictions. We hope that in June the collective experience of the cinema we have been longing for will be possible once more – even though there will most certainly still be rules and regulations we are not as accustomed to due to the ongoing pandemic.

In addition to this, the current exceptional circumstances in Austria have to be taken into account, as the extended lockdown have made the preparations for the festival even more difficult on multiple levels. Also, with the selection of the dates in the first week of June, we aim to avoid a collision with other film events in Austria as much as possible. We also intend to utilize the proximity of the Diagonale festival, in order to create a form of synergy together the with its team. Details concerning this will be announced at a later date.

On our website you will find a FAQ concerning the postponement of the festival, as well as additional information on the new festival dates. We will do our best to process all inquiries as quickly as possible.

The planning for CROSSING EUROPE 2021 includes a great amount of considerations in order to be prepared for all possible eventualities, that could mean adjustments to the structure of the festival, or in regards to the size of the events. Additionally we have already begun to work on a comprehensive Covid-19 prevention plan, fitted to the current situation.

During the planning phase of the eighteenth festival edition, we were able to win over an additional event partner. The CENTRAL (www.centrallinz.at), is literally a five minute walk away from the festival center located in the heart of Linz, and will host screenings as well as talks in 2021 as an additional venue. This expansion became necessary, considering that we do not expect to be allowed to fill the venues up to their capacity in our regular festival venues (the key word being checkered seating).

On top of this, the work in terms of further adaptations is also heavily underway: Among other things, online ticketing will be expanded, “temporal equalization” of the program (longer time slots in between the screenings), international guests and selected festival events will be live streamed, there will be on offer to stream selected festival films after the festival (similar to the VoD offer in 2020), the OK-square will be arranged to act as an “Open Air Meeting Zone”, in respect to the current rules and regulations regarding the Covid-19 virus, and possibly a stationary testing facility.

Despite the postponement of the CROSSING EUROPE festival, the audience can look forward to a rich and many faceted program in June 2021. It is our explicit goal to present ambitious European film in an accessible manner, and to offer a direct exchange with international and regional filmmakers who will hopefully be able to attend in-person. It goes without saying that compliance with the rules and regulations to curb the spread of the Covid-19 virus will be ensured during all festival events. 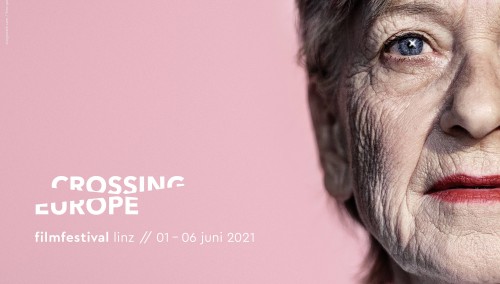