The Belgian filmmaker Fabrice du Welz is what is called an auteur, an artist following destiny: In a talk at the Sorbonne in March 2021 he said that with every film he wants to become a better human.
Born in Brussels in 1972, he went to a Jesuit school and studied drama for two years, followed by one year of directing. Starting in 1990, he made Super 8 movies, and in 2004 his first feature-length film, THE ORDEAL, which premiered at Critics’ Week at Cannes Film Festival. THE ORDEAL is the first part in the “trilogie ardennaise” shot by du Welz in the forests of the Ardennes. The other two are ALLELUIA (2014) and ADORATION (2019). His most recent movie is INOREXABLE, in which du Welz interprets the tried and tested genre elements: middle-class, lonely chateau, and nanny. Fabrice du Welz, who according to his own accounts had his cinephilia imparted on him by the Jesuit padres, is a frequent guest lecturer at film schools and runs a private ciné-club, where he passes on his love for cinema to his children. He lives in Brussels.

Every reasonable person knows that a forest is not just a mere gathering of trees. The forest is a place of retreat and hiding, it is as unending as it is claustrophobic, a natural space where humans looking for the primeval creature hidden inside them are haunted by their own demons. Fabrice du Welz knows these connotations and loads them into his works. Urban life has had no place in his films to date, they take place in and with nature. Even when scenes are set in a city, like in VINYAN (2009), it seems like a jungle: Caught in darkness, noise, and rain, and followed by an erratic camera, a married couple wanders through a Thai town. Jeanne (Emmanuelle Béart) and Paul (Rufus Sewell) have lost their five-year-old son during the tsunami in 2014, and arrive at what seems to be the furthest corner of this inhospitable urbanity to find a man who promises to find their son. He brings them to an island where they cut their way through the undergrowth, literally drown in mud and are driven to lunacy by a horde of anarchic orphan children. It is not just in VINYAN that Fabrice du Welz makes use of all the elements: There is fire, thunders and fog rising wherever one looks. And if there is a chance at something like calm, Paul will mount his wife, the sexual act being a symbol for the brutality of survival.

Fabrice du Welz makes films about relationships as havens of violence and danger, manipulation and dependence. Movies in which obsessions, delusions, and the dark sides of a personality come to perfection in interpersonal space. Because madness in itself is not dangerous, madness manifests in relation to what is considered normality. These films are downward spirals at a walking pace that the characters could exit if only their sticking to the chosen path did not make them blind to diabolical omens. Only we the audience know how to interpret the purposeful use of the color red.

In his first feature-length film from the year 2004, CALVAIRE, we meet solo entertainer Marc (Laurent Lucas), whose singing brings so much delight to the residents of a nursing home that not just one of them ignites in wild desire for him. He takes to his heels. And finds himself and his van in a forest. The rain is pouring, and an obvious madman who is searching for his dog shows him the way to a lonely inn where he gets an enthusiastic reception by an old hermit. The contradiction in this man’s personality dawns upon Marc only as he is already stuck in the thick of a martyrdom (“calvaire” means Calvary and ordeal) that he is put through with increasing brutality by the phrasemongering Monsier Bartel (“only persistence is rewarded”), who is apparently driven by the loss of his wife, Gloria. Allusions to sexual perversions complete the image.

In texts that I have read about the work of Fabrice du Welz, I have frequently found the adjective “extreme”. I would call the films of Fabrice du Welz compelling or dark, sinister and, in their exaggerated use of psycho thriller elements, almost anachronistic. They do not shy away from repetitions and loosely refer to each other. These films quote images that have been made use of dozens of times, of haunted houses, the wide open eyes of children, and black branches, coming within a whisker of irony. They are not extreme, if only because we the audience are safe even when the blood is spurting and visibly oppressed souls are up to ugly things. But maybe today it is extreme to do what you feel like. Which Fabrice du Welz does.

He measuredly turns on his fog machine, putting a Gloria into play in virtually every film, who has to be followed by every and all: A Gloria is the main character in four of his five features, and that is not the only instance in which du Welz’s Catholic boarding school past shines through. He gives the title ALLELUIA (2014) to a film about a serial killer couple that was inspired by the true story of the so-called Lonely Hearts Killers of the late 1940s, superelevating the love between womanizer Michel (Laurent Lucas) and corpse washer Gloria (Lola Dueñas) into an erotically charged bloodfest.

The next film from the year 2019, ADORATION, has quite the idyllic beginning: Summer sunlight is shining through green leaves, a blonde-haired boy frees a bird that got tangled in a string. And just as innocent as he is with the bird is how he stands up for a girl kept in a psychiatric clinic (of the haunted house type of architecture). As a notorious liar, Gloria, who is consistently dressed in red, is the manipulative kind of lunatic. After the clinic director has been incapacitated (film image: person sailing through a stairwell), Gloria and Paul skedaddle into the woods. Which is where they are going to stay, these two beings in between, who are children no more, but not yet youths, they will explore their bodies, let themselves float through rivers, eat red currants, and Gloria will panic at the sight of a chicken. She calls the shots, with Paul, caught in a jungle of dreams, being the accessory to her madness.

One could reason now that the men in du Welz’s films are instinct-driven beings who lose their head over every Gloria coming around the corner. Proof to the fact that this is not exactly the case is writer Marcel (Benoît Poelvoorde) in INOREXABLE, who is the first to hedge certain doubts about the innocence of nanny Gloria. But no one listens to him. His wife Jeanne (also a woman’s name repeatedly found with du Welz, involving its own huge character arsenal that includes heroism and a cruel death) is too busy orchestrating the renovation of the inherited chateau and does not notice the more than clear signs over the summery idyll of a daughter playing in the meadow with her dog and nanny. In Gloria, daughter Lucie (the enlightened, whose name, however, is also conspicuously close to Lucifer) sees her long-desired sister. Marcel capitulates, not least because he holds the hope that the nanny can make him succeed where he fails with his wife (to get it up). Which in turn makes him blind for the beast hidden in Gloria. Lost his head after all. This is the kind of downward spirals found in du Welz’s works.

The only blameless creature in INOREXABLE is a white dog. But since it is named after the greatest of all Greek heroes, the one who stands for strength, cunning, and a distinct sense of family, this dog Ulysse cannot be trusted either. Also, it is the one in the first place that brings the ominous nanny into the house. An old chateau, with its merlons and peeling patina, standing amid high meadows and trees. Here it stands in front of us, just like it did in ADORATION: the iconographic image of the haunted house. The enchanted castle under the blue night sky in the middle of the forest; you can hear a screeching owl calling, or at least imagine hearing it. But not a single ghost haunts these empty corridors and curved stairwells. Even if the light suddenly goes out as if by magic, even if those bad dreams come, even if someone has bitemarks, there will be calm above all treetops. It is only the people themselves who are obsessed. And only by their own lies, tangible psychoses, and other things that have a name. But it is exactly this anchoring in a realistic psychological cosmos that defines the films of du Welz. 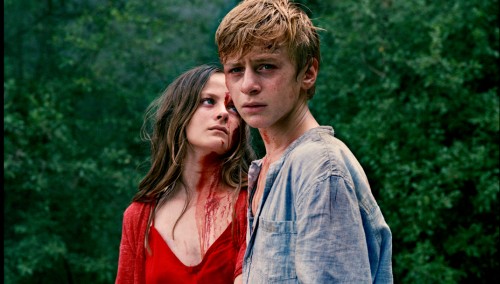 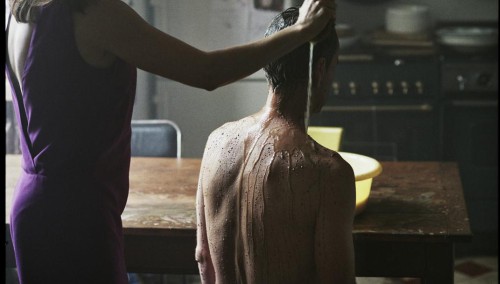 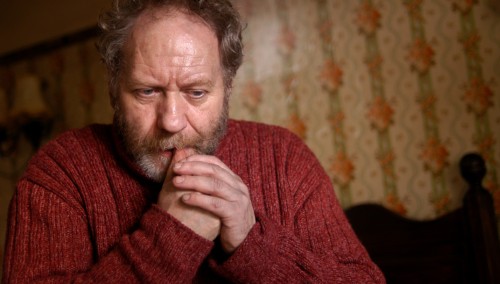 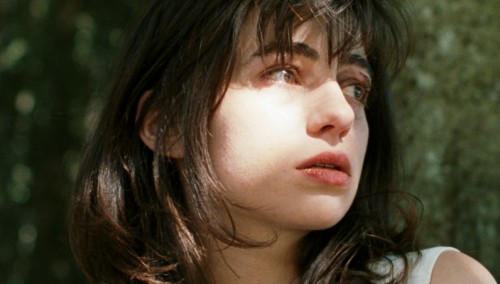 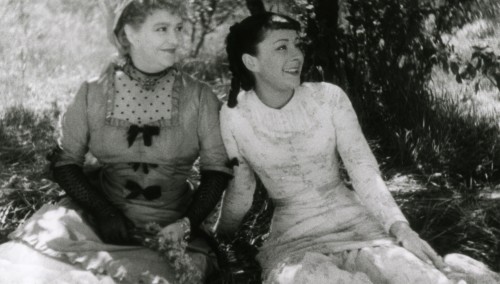 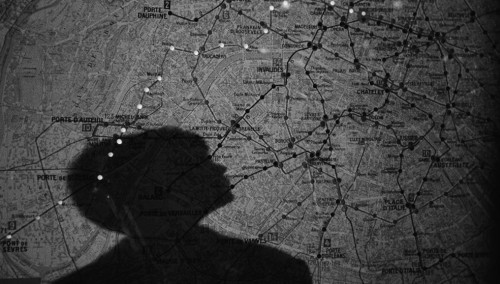 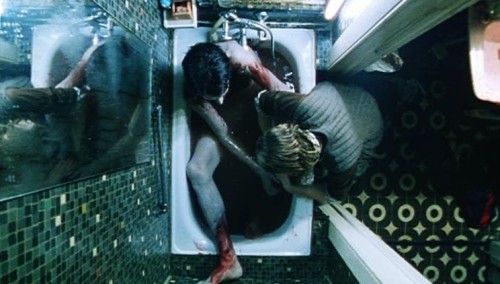 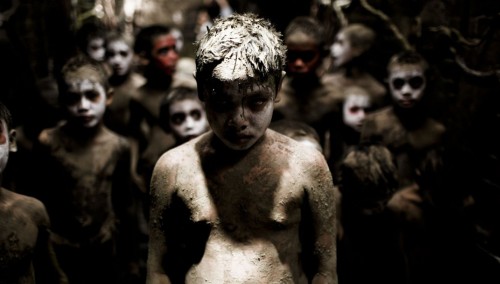