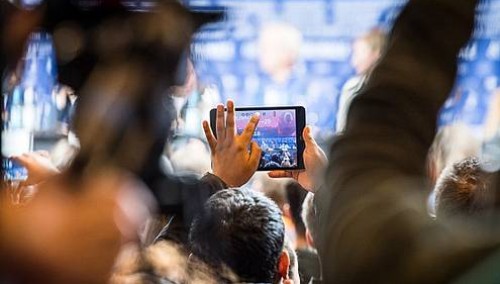 The CROSSING EUROPE Selection on DAFilms.com

29.04.2019
For the first time this year, the festival cooperated with the VoD-platform Doc Alliance. The CROSSING EUROPE Selection was curated by the festival team over the past few weeks and consists of ten noteworthy contributions in the documentary sections from the past few festival editions, and can be viewed online from now on. Details HERE.
READ MORE »

29.04.2019
To call out YAAAS! means to euphorically say "YES!" - "YES!" to the new program section aimed specifically at young audiences. Last Tuesday, the presentation of the YAAAS! Video Project as well as the YAAAS! Workshop Rally took place.
READ MORE »

29.04.2019
The Awards Presentation for the sixteenth CROSSING EUROPE Film Festival Linz took place on April 29 in the Ursulinensaal of the Upper Austrian Culture Quarter. Following awards were presented:
READ MORE »

25.04.2019
Various discussion formats, networking events and a masterclass offer the audience a place for active exchange to get to know each other, and to deal with the films in a discursive manner.
READ MORE »

12.04.2019
From April 25 to 30 we want to invite the festival audience to join us on a virtual journey all across Europe. The cinephile path streches from the Arctic down the Black Sea, on it 149 current European feature films and documentaries.
READ MORE »

10.04.2019
As is tradition, CROSSING EUROPE will open with multiple films this year that stand for the great variety of contemporary European cinema, and also offer a cross section of this year’s program.
READ MORE »

28.03.2019
CROSSING EUROPE has been connected to the Macedonian director Teona Strugar Mitevska since the very beginning. At the very first edition of the festival in 2004, her feature film debut KAKO UBIV SVETEC / HOW I KILLED A SAINT (MZ/SI/FR 2004) was awarded the CROSSING EUROPE Award – Competition fiction. Ever since then, all her films have been presented in Linz as Austrian premiers. For this reason, we are very happy to announce that her new feature film, which had its world premiere at the Berlinale and was awarded with two awards (Prize of the Ecumenical Jury and the Gilde film prize) will be this year’s closing film.
READ MORE »

28.03.2019
In this year’s program selection you will find many CROSSING EUROPE guests and award winners from the previous editions who will be returning to Linz with their current productions – significant films in this year’s edition made by directors who have been connected to the festival for many years, thereby also shaping the festival.
READ MORE »

28.03.2019
The YAAAS! Competition is a part of the new YAAAS! Youth Program at CROSSING EUROPE, that offers a holistic program of film education, acquisition of media competencies and DIY-video production. Taking place for the first time this year, the YAAAS! Competition is the fourth competition section, in which the winner of the CROSSING EUROPE Award – Youth Jury, endowed with 2000€ is selected.
READ MORE »

28.03.2019
For two years now, the festival has been cooperating with FLIMMIT (flimmit.com), the Video-on-Demand platform of the Austrian broadcasting service. Thousands of productions (mostly Austrian and European) can be viewed, including many highlights of the European film festival.
READ MORE »